Ancient Near Eastern Background and the Decalogue


The Koinonia blog has posted on possible ancient Near Eastern backgrounds and the Decalogue.

Posted by Charles Savelle at 7:36 AM No comments:

Memoirs of an Ordinary Pastor: The Life and Reflections of Tom Carson


I have just finished reading D. A. Carson's book on his father entitled, Memoirs of an Ordinary Pastor: The Life and Reflections of Tom Carson. I found the book to be both encouraging and edifying. As I read the book I was reminded of words that Carl Sandburg used in reference to Abraham Lincoln: "A tree is best measured when it's down" (Abraham Lincoln, p. 433). Carson's book shows that what is said of a president can also be said of many "ordinary pastors" who may never have biographies penned about them, but who have their names in the Lamb's book of life.

Posted by Charles Savelle at 11:49 AM No comments:

This post continues a series on biblical genealogies (see here and here). Today, I will discuss open and closed genealogies.

A significant and controversial issue related to genealogies is the issue of open and closed genealogies. Closed genealogies are genealogies that comprehensively and sequentially include a representative person in each generation covered in the genealogy. This does not mean that every person within a generation is identified, but that there is a direct and unbroken link between generations. Indeed, genealogies by nature tend to be selective (sometimes referred to as telescopic). Open genealogies are genealogies that are sequential but not comprehensive. That is, there are “gaps” within the genealogical record. Wilson refers to these “gaps” in terms of fluidity and has identified three types of fluidity: (1) changes in genealogical relationships, (2) additions of names, (3) disappearance or omission of names.[1] Usually these “gaps” are understood to be intentional and made for various reasons. These reasons can include the desire to have exactly a certain number of generations (7, 10, etc.),[2] a desire to be representative not exhaustive (only “hit the high spots”), or a desire to exclude certain individuals (unimportant or undesirable individuals). The problem here is that attempting to determine why a given genealogy was formed in a particular way is highly speculative. Green has argued strongly for the existence of open genealogies in Scripture,[3] and many, if not most, accept this premise as a given. Nonetheless, whether a particular genealogy is open or closed is a point of much debate. This tension is particularly acute concerning the genealogies in the Book of Genesis (e.g. Gen 5; 11). The issue is further complicated by the New Testament usage of the Old Testament genealogical data. Matthew[4] and Luke’s[5] genealogies seem to support open genealogies whereas Jude[6] seemingly supports a closed position.

[1] Wilson, Genealogy and History in the Biblical World, 29-36.
[2] Sasson argues that it was common Hebrew convention to make minimal alterations in genealogies to highlight certain individuals by placing them in the seventh (or sometimes the fifth) position. Jack M. Sasson, “A Genealogical "Convention" in Biblical Chronography?,” Zeitschrift für die alttestamentliche Wissenschaft 90 (1978): 171-85. But Sasson’s work is not without problems. See David T. Bryan, “A Reevaluation of Gen 4 and 5 in Light of Recent Studies in Genealogical Fluidity,” Zeitschrift für die alttestamentliche Wissenschaft 99 (1987): 181-82.
[3] William Henry Green, “Primeval Chronology,” Bibliotheca Sacra 47 (1890): 285-303.
[4] In Matthew 1:8, Matthew leaves out at least three generations (Ahaziah, Joash, Amaziah). Furthermore, Matthew’s depiction of three sets of fourteen genealogies appears to most to be highly stylized and intentional.
[5] In Luke 3:36, Cainan is included between Arphaxad and Shelah. Cainan does not appear in the Masoretic text, although it does appear in the LXX (Gen 10:24; 11:12-13).
[6] Jude 14 states that Enoch was the seventh generation from Adam.

Posted by Charles Savelle at 10:57 AM No comments:


My friend René López has a new website called Scripture Unlocked. There are a variety of resources available. Check it out here.

Posted by Charles Savelle at 8:20 PM No comments:

Posted by Charles Savelle at 6:40 PM No comments:

Mounce on the Imperfect Verb


Bill Mounce has posted on the imperfect verb in Greek.

Posted by Charles Savelle at 2:09 PM No comments:


I recently began a series on biblical genealogies (see here). Today, I want to discuss the forms of genealogies.


[1] Wilson, Genealogy and History in the Biblical World, 9.

Posted by Charles Savelle at 9:42 AM No comments:


Not sure if this is available in Toys R Us yet!!! 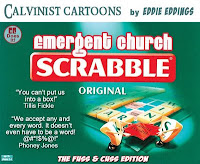 McKnight on the New Perspective


Scot McKnight sums up the new perspective on Paul in three lines.

Read Scot's post here.
Posted by Charles Savelle at 11:23 AM No comments:


Genealogies tend to be an area of the Bible that most people know little about. However, I have to admit that I am a bit intrigued by this material. So I will have several posts dealing with some of my research in this area. Today, I want to discuss a definition and the types of genealogies.