Ancient Inscriptions and the New Testament

D. Clint Burnett explains here why he thinks that it is important to read ancient inscriptions alongside the New Testament. I think he is correct but one needs to exercise great care in using since many inscriptions lack context and there can be a tendency of committing the parallelomania error.

Posted by Charles Savelle at 9:23 AM No comments:

Bob Kauflin has a good post here on the songs in Revelation 4 and 5. He notes that they are songs of exuberance, explanation, encouragement, and expectation.

Posted by Charles Savelle at 9:36 AM No comments:

Free Logos Books for April: The Universal Story: Genesis 1–11 and Thoughts in Solituade

The free Logos books for the month for April are The Universal Story: Genesis 1–11 (Transformative Word) by Dru Johnson and Thoughts in Solitude by Thomas Merton. You can also purchase the following nine volumes at greatly reduced prices.

Faith Amid the Ruins: The Book of Habakkuk (Transformative Word)by Heath Thomas: $1.9

Singing in the Reign: The Psalms and the Liturgy of God’s Kingdom by Michael Barber: $1.99

Christ Above All: The Book of Hebrews (Transformative Word) by Adrio König: $2.99

Faith Comes from What is Heard: An Introduction to Fundamental Theology by Lawrence Feingold: $11.99

Nehemiah: A Pastoral and Exegetical Commentary By T. J. Betts: $14.99

You can also register for a chance to win the 64-volume Lexham Press Commentaries. For all these offers, go to the Logos' Free Book of Month page here and here.
Posted by Charles Savelle at 2:07 PM No comments:

Why Didn’t the Israelites Circumcise in the Wilderness?

David Frankel attempts to answer the question here. I don't agree with Frankel's conclusion which requires a fair amount of redaction and depends on a view of the authorship of Torah that I do not hold but the discussion is interesting nonetheless.

Posted by Charles Savelle at 9:40 AM No comments:

It was reported here that a Tyrian shekel was found in recent conservation work at the so-called Tower of David. According to the reports, "the ancient coin was found inside a box of artifacts originally excavated in the 1980s." But technically, as my numismatist friend Russell Atherton points out, it is not a Tyrian shekel but a coin of Demetrius (or Demetrios) II, with the portrait of Demetrius not Melqart. This would make it a tetradrachm rather than a shekel. The name "ΔHMHTPIOY" can be seen clearly on the reverse although the date is hard to make out (see the picture below from the article).

In sum, it is a nice coin, but not especially rare and not correctly attributed. This is one example why one needs to exercise care in reading news reports on archeological finds. 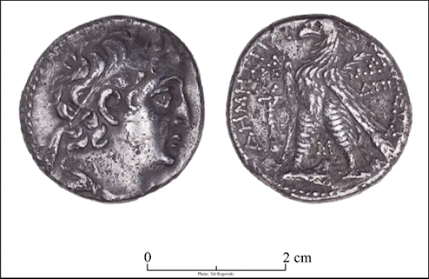 Posted by Charles Savelle at 1:18 PM No comments:

Posted by Charles Savelle at 10:08 AM No comments:

Steve Walton has made his slide presentation available for a recent talk that he gave on Elijah, Elisha, John and Jesus in Luke–Acts here.This was part of a two-day online seminar on the use of the Old Testament in the New.

Posted by Charles Savelle at 10:06 AM No comments: