The Challenge of Interpreting Ecclesiastes


I haven't had the chance to dip to deeply into Peter Enns' new commentary on Ecclesaistes, but he does sum up nicely some of the interpretive challenges that I have sensed in studying this book. Enns writes,

"There is . . . a vicious circle in interpreting Ecclesiastes. How one understands the overarching message of Ecclesiastes as a whole will affect how one handles the details of the book itself, yet the book's overall message cannot be determined apart from the book's details. Of course, on one level, this circle is operative with any biblical book, but the problems are augmented in the case of Ecclesiastes: it is not only the introductory questions that prove elusive, but the very details of the book, the data by which a plausible model of the whole must be constructed, likewise suffer from difficulties and ambiguities, and thus challenge any attempt to harness its overall message. It is a common experience when reading Ecclesiastes that, just when it seems the book's train of thought has been apprehended and some firm conclusion is forthcoming, a verse or two later the author says something that turns it all on its head. One begins to suspect that this is precisely what he has in mind . . . ."

Christianaudio.com is offering two free audio books in December  through December 31.
The first free audio book is From Pearl Harbor to Calvary by Mitsuo Fuchida. According to the website,
"Mitsuo Fuchida was a Captain in the Imperial Japanese Navy Air Service who is perhaps best known for leading the first air wave attacks on Pearl Harbor on December 7, 1941. Fuchida was responsible for the coordination of the entire aerial attack working under the overall fleet commander Vice Admiral Chuichi Nagumo."After World War II ended, Fuchida became an evangelist, Christian preacher and frequently traveled to the United States to minister to the Japanese expatriate community. He became a United States citizen in 1966. His autobiography was originally released in 1953, and this edition will be published to coincide with the 70th anniversary of the attack on Pearl Harbor on December 7, 2011."

The second free audio book really needs no introduction. It is Charles Dickens' A Christmas Carol.

Posted by Charles Savelle at 12:42 AM No comments:

The Reality Check of the Word

"In our world of virtual reality it is the Word of the Lord that brings realism. This is the 'reality check' that dispels illusions with the sunlight of truth. In our lives and in our ministries we must hear him, Jesus Christ, the living Word."
Edmund P. Clowney, Preaching Christ in All of Scripture (Wheaton: Crossway, 2003), 175.

Posted by Charles Savelle at 5:34 PM No comments:

On Translating from Some Translators

Andy Naselli has some links here to a a symposium held at Liberty University involving Doug Moo, Wayne Grudem, and Ray Clendenen discussing the NIV, ESV, and the HCSB respectively.
Posted by Charles Savelle at 7:56 AM No comments:


Daniel Streett has an interesting take on James 2:1-9 which places the passage in the context of an early Christian meal. You can read more about his argument on his blog here. I have to think a bit more about it, but it does seem to be a plausible explanation.

Posted by Charles Savelle at 12:34 AM No comments:

Some Explanations for Daniel's Decision to Avoid Defilement (Daniel 1)

Anne Gardner has an interesting article in the Australian Biblical Review in which she surveys various explanations and then offers her own take on the matter. Gardner lists the following explanations which I have summarized and modified somewhat.


I have summarized Gardner's solution as follows.

Daniel and his friends reject the king’s portion of prey because it is morally tainted and and wish to live according to God’s first mandate concerning food (Gen 1:29–30). It is also possible that Daniel and his friends had taken a Nazirite vow and the consumption of “seeds” and “water” may also mirror Ezekiel’s prophetic sign in Ezekiel 4:1–15.
See Anne E.Gardner, "The Eating of Seeds and Drinking Water by Daniel and Friends: An Intimation of Holiness," Australian Biblical Review 59 (2011): 53-63.

Posted by Charles Savelle at 5:43 AM No comments:

The Need for Patience in Biblical Study

"There is a different side to character that a Bible scholar needs to develop-virtues. For one thing a Bible teacher or scholar needs lots and lots of patience. Despite the fact that our culture suggests we can have everything quickly, getting at the meaning of ancient texts in their original contexts is, or can be, a slow process. Sometimes the outcomes of a detailed and intense study of the Bible in its culture can be disappointing. It's precisely when the text does not cough up the results you were expecting or wanting that you find out what sort of Bible teacher or scholar you actually are."
Ben Witherington III, Is There a Doctor in the House? An Insider's Story and Advice on Becoming a Biblical Scholar (Grand Rapids: Zondervan, 2011), 127.

Posted by Charles Savelle at 5:28 AM No comments: 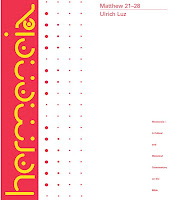 This is the third and final volume of Luz’s three volume Matthew commentary. This three volume series is based on Luz’s original German four-volume commentary. It is technical in content and critical in methodology. For information on the first volume, Matthew 1–7, see here and for information on the second volume, Matthew 8–20 see here. For more information on the Hermeneia series see here.
Publisher's Description:
In this third volume, Luz brings his superlative analysis of Matthew's Gospel to a close. He is renowned for both his discerning exegetical insights as well as his tracing of the effects the text has had throughout history — in theological argument, art, and literature. This final section provides in-depth treatment of Jesus' final days — his entry into Jerusalem, the Passion Narrative, and post-resurrection appearances..
Abbreviated Table of Contents:
Foreword to Hermeneia
Editor's Note
Preface
Translator's Preface
Reference Codes

A Introduction
B Commentary

Posted by Charles Savelle at 3:46 AM No comments: