The Vigin Birth: A Cautionary Tale

Ben Myers has an interesting post here about a post he had written seven years ago and his view now concerning the virgin birth. Here is one paragraph from the post that I think aspiring bloggers and budding theologians should read carefully.
"I guess all I'm trying to say is that I used to be a lot more cynical and sophisticated than I am today. As one of the saints has said, "I was so much older then, I'm younger than that now." Nowadays, to be honest, I'm just very grateful to be a Christian at all. Three-legged tables are fine, as far as they go. But you can rely implicitly on the ones with four legs; that's the kind you want when you're sitting down in the comfort of your own home, day after day, a table just like the one your grandfather used, and just like the one your great-grandchildren will use too, long after you've left the world and gone to that big dinner table in the sky."

Make sure to read the rest of the post as well.

Posted by Charles Savelle at 12:32 PM No comments:

The latest issue of Review of Biblical Literature is out. Reviews can be accessed by clicking the links below.

Jason B. Hood
The Messiah, His Brothers, and the Nations: (Matthew 1.1-17)
http://www.bookreviews.org/bookdetail.asp?TitleId=8335
Reviewed by M. Eugene Boring

Brent Landau
Revelation of the Magi: The Lost Tale of the Wise Men's Journey to Bethlehem
http://www.bookreviews.org/bookdetail.asp?TitleId=7944
Reviewed by Craig A. Evans

Stanley E. Porter and Cynthia Long Westfall, eds.
Empire in the New Testament
http://www.bookreviews.org/bookdetail.asp?TitleId=8054
Reviewed by Torrey Seland
Posted by Charles Savelle at 1:11 AM No comments:

Posted by Charles Savelle at 9:28 AM No comments:

The Limits of General Revelation

I was recently teaching about the difference between general and special revelation and came upon this helpful statement from Robert Lightner.
“God’s revelation in the world does not possess power to alter man’s conduct. Also, it is very limited and restricted in its extent and purpose. God did not give it to correct man but to communicate to him his need for correction. Neither does the revelation of God in the world include the cure or the basis for cleansing man’s sin. Only God’s revelation in the Word provides these necessities. Furthermore, the revelation God gave of Himself in nature and in the conscience of man is limited. Man’s lost condition, his need of a substitute for his sin, and Jesus Christ as the only Saviour from sin are only revealed in Scripture. Neither does general revelation tell man how to live. Even to our first parents God had to speak before they knew what to do and how to live. The beauty and splendor of the garden did not communicate such knowledge to them.” Robert P. Lightner, The God of the Bible: An Introduction to the Doctrine of God (Grand Rapids: Baker, 1973), 53.

Posted by Charles Savelle at 8:45 AM No comments:

Todd Bolen at BiblePlaces.com is giving away two copies of the Israel Collection (volumes 1-5) from the Pictorial Library of Bible Lands.You really should enter this contest and hope/pray that you win. You can read more about the contest here. 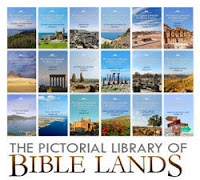 Posted by Charles Savelle at 11:55 AM No comments:

Hamilton on His First Pastorate


James Hamilton has a post worth reading on some lessons he learned from his first pastorate here.

Posted by Charles Savelle at 12:32 PM No comments:

The latest issue of the Bulletin for Biblical Research is out. Here is a list of the articles.
Toward a Theory of the Poetry of the Hebrew Bible: The Poetry of the Psalms as a Test Case Beat Weber The Book as Specimen, Talisman, and Dragoman in Africa: A Look at Some African Uses of the Psalms and 1 Corinthians 12–14 Grant LeMarquand Paul and Sedition: Pauline Apologetic in Acts Craig S. Keener Rewriting Prophets in the Corinthian Correspondence: A Window on Paul’s Hermeneutic J. David Stark The Spiritual Powers of Ephesians 6:10–18 in the Light of African Pentecostal Spirituality J. Ayodeji Adewuya

Posted by Charles Savelle at 7:08 AM No comments: