Resources for Teaching and Preaching Habakkuk


Shane Lems has a discussion of commentary resources that he found helpful in preaching and teaching Habakkuk here.

Posted by Charles Savelle at 4:12 PM No comments:

The Prophets as Covenant Enforcers

"Theologically the prophets proclaim the word of Yahweh in the context of the Mosaic covenant, primarily as defined by Deuteronomy. After Yahweh delivered the Israelites from Egypt and as he led them to the Promised Land, he entered into a covenant agreement with them, as spelled out in Deuteronomy. This defined the relationship Yahweh was to have with his people, and it spelled out clearly the terms by which the Israelites could live prosperously in the land under the blessing of Yahweh. As the people enter into the Promised Land (book of Joshua), the driving question is: Will they be obedient and keep the terms of the law as spelled out in Deuteronomy? The tragic answer recorded in Judges to 2 Kings is 'no.' In general, the Israelites abandon Yahweh to worship idols, and they also succumb to the low judicial and moral standards of their neighbors. The prophets deliver Yahweh's word in a situation of flagrant covenant violation and of almost total disregard for the book of Deuteronomy."


J. Daniel Hayes, The Message of the Prophets: A Survey of the Prophetic and Apocalyptic Books of the Old Testament, ed. Tremper Longman III (Grand Rapids: Zondervan, 2010), 62-3.

Posted by Charles Savelle at 5:38 AM No comments:

Some commentaries try to be like Walmart, a one-stop shop for everything. But very few commentaries are actually able to pull it off. Other commentaries are less ambitious in scope and focus more narrowly on certain emphases or approaches. Dr. William Varner’s new commentary on James falls into the second approach with a particular emphasis on applying discourse analysis to the book of James.
By way of introduction, this commentary contains five major elements. They include an introduction to the commentary, an introduction to the discourse method for James, the commentary proper, appendices, and a bibliography.
In the introduction Varner clearly identifies what he is seeking to do (examining James from a discourse analysis perspective and providing assistance on matters related to exposition) and what he has chosen not to do (deal extensively with matters of introduction or interact exhaustively with the commentary tradition). Ultimately, the commentary should be evaluated on its stated goals and not necessarily our expectations. If this is the case, I think that Varner’s work has succeeded in large measure. The author clearly discusses the methodology of discourse analysis (pp. 14–28) and how that relates to James in general (pp. 28–40). It is here that Varner proposes that James 3:13–18 is the discourse peak for the book (p. 28). In the commentary proper, one helpful feature, and maybe the most helpful feature, is the clausal analysis of every clause in James. The discussion of the passages are thorough but not exhaustive. If one is interested in a compendium of views, then this commentary will disappoint. But if one is looking for a judicious treatment of the major textual issues, then Varner’s work deserves a place on the study desk. The only minor drawback will be for readers who are unfamiliar with the methods and terminology of discourse analysis.
There are three brief appendices in the commentary. Appendix one addresses the person of James, and appendix two contains a homiletical outline. The third appendix consists of a sample exegetical outline. In the latter two appendices, Varner seems to address most clearly the matters of exposition. These appendices are helpful and should be of value to preachers and teachers. If I have one criticism it is that exposition is not only concerning with explanation of a text, but also with its theology and application. Additional appendices dealing with theology and application would bolster the usefulness of this work. Until and if these are added to a future revision, I commend the interested reader to the author’s blog which he has a whole series of posts dealing with devotional applications from James.
The commentary is rounded out with an eleven page, partially annotated bibliography. The bibliography is not meant to be exhaustive, but does seem to cover most of the major works related to James.
In summary, there is much to appreciate about this commentary. Its relative brevity is appealing to readers who have grown weary from the encyclopedic nature of many recent commentaries. It is affordable with a list price of only $19.99. But most of all, this commentary is helpful in leading the reader through the major exegetical issues in James.
Thanks to Kress Biblical Resources for this review copy.
Posted by Charles Savelle at 5:06 AM No comments:

A Resource for Zotero Users

Posted by Charles Savelle at 3:00 PM No comments:

In part 1, I noted that there was considerable evidence in Acts to suggest that Paul was pro-Law. Now we will evaluate that evidence. It is my contention that although Paul was likely pro-Law, the presentation in Acts may not be as clear-cut as it first appears. For example, we noted that Paul often began his ministry in the synagogue, observed the Sabbath, and taught from the Law and the Prophets. But it is important to note that each of these points were part of Paul’s missionary strategy in taking the Gospel to the Greco-Roman, going first to the Jews and then to the Gentiles. The fact that Paul’s ministry involves the synagogue may have less to do with his allegiance to the institution than it has to do with how he could most effectively reach Jewish communities with the gospel. Similarly, Paul’s circumcision of Timothy (16:3) appears to have more to do with having an effective ministry among the Jews than with any a priori commitment to circumcision. Paul’s vow (18:18) could certainly be a Nazarite vow and thus illustrate Paul’s commitment to the Mosaic Law, but a number of interpreters are uncertain that Paul’s vow is best identified as a Nazarite vow. In fact, a Nazarite vow is only one of at least four possibilities. [1] According to Acts 20:16, Paul wanted to reach Jerusalem by the Day of Pentecost, but we are not told why. He certainly, and maybe even probably, could have been motivated by a desire to observe the Feast, but there are other reasonable explanations. Peterson suggests that Paul may have been motivated by his desire to deliver the collection from Gentile churches during Pentecost. [2] Just as ambiguous are Paul’s statements before the Sanhedrin, Felix, and Festus. For example, in Acts 22:3 Paul affirms his training in the Law. But this affirmation is pre-conversion, making it difficult to determine whether or not Paul is merely stating a personal fact or whether he is affirming a present allegiance to the Law. Paul does confess to “believe everything according to the Law and that is written in the Prophets” in 24:14, but 24:15 makes it clear that he has in mind the Law and the Prophets as they testify to the eschatological hope and not the Law as it relates to regulatory practice.
In summary, what appears at first glance to suggest that the Paul of Acts is characterized as clearly Law-observant is open to question. Did Paul keep the Law? There is some indication that he did. Did Law-keeping define Paul’s ministry? Perhaps, but the answer to this question is still open to debate. In my next post on this topic, I want to address perhaps the strongest evidence in Acts that Paul was a Torah-observant, namely, Acts 21:17–26.
[1] Darrell L. Bock, Acts, ECNT (Grand Rapids: Baker, 2007), 585–86. Bock concludes that Paul’s vow was probably a private vow and not a Nazarite vow (Bock, Acts, 586). In any case, even if one concludes that it was a Nazarite vow, it does not appear to strictly follow the procedure stipulated in Numbers 6.
[2] David G. Peterson, The Acts of the Apostles, PNTC (Grand Rapids: Eerdmans, 2009), 562.
Posted by Charles Savelle at 5:42 AM No comments:


Kenneth Way has a good discussion of some of the "heroes," or perhaps more accurately the antiheroes, of Hebrews 11.

Posted by Charles Savelle at 7:28 AM No comments:

Posted by Charles Savelle at 5:25 AM No comments:

Some might enjoy this brief article by Mark Chavalas entitled "Bible wasn’t written in historical vacuum."
Posted by Charles Savelle at 3:24 AM No comments:

The Prophets as Anthologies

The following statement by Daniel Hayes is really important for beginning students of the Prophets to understand. I have found that sometimes students are unfamiliar with literary anthologies so I will use examples from movies or music compilations.
"The prophetic books are not essays organized around propositional statements and logical sequential argumentation. Neither are they stories driven by sequential time, action, and plot. While they are organized and logical, and while they do reflect plot (in the broadest sense), most of the prophetic books can probably best be categorized as anthologies. That is, most of the prophetic books are collections of material—oracles, sermons, dialogues, and short narrative episodes. In this sense they are similar in some regards to a modern anthology of a poet's life: poems, letters, stories, and so forth. Sometimes broad thematic unity is present, and occasionally a few short sections will be combined chronologically. Likewise, catchwords or "theme-words" will occasionally connect sections."
J. Daniel Hayes, The Message of the Prophets: A Survey of the Prophetic and Apocalyptic Books of the Old Testament, ed. Tremper Longman III (Grand Rapids: Zondervan, 2010), 62-3.

Posted by Charles Savelle at 5:25 AM 4 comments:

The Theology of the Book of Revelation 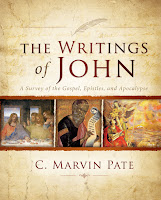 C. Marvin Pate, The Writings of John: A Survey of the Gospel, Epistles, and Apocalypse (Grand Rapids: Zondervan, 2011), 350.

Posted by Charles Savelle at 5:12 AM No comments: