Theological Lexicon of the Old Testament on Sale

Those looking to pick up the Theological Lexicon of the Old Testament edited by Ernst Jenni and Claus Westermann might want to check out Christianbook.com's academic deal of the day here. They have all three volumes for $29.99.

Posted by Charles Savelle at 1:22 PM No comments:

The latest issue of Review of Biblical Literature is out. Reviews can be accessed by clicking the links below.

Jan P. Fokkelman
The Book of Job in Form: A Literary Translation with Commentary
http://www.bookreviews.org/bookdetail.asp?TitleId=8770
Reviewed by Roger Marcel Wanke

Lee Martin McDonald
The Origin of the Bible: A Guide For the Perplexed
http://www.bookreviews.org/bookdetail.asp?TitleId=8073
Reviewed by Stephen Reed

Andrew David Naselli
From Typology to Doxology: Paul’s Use of Isaiah and Job in Romans 11:34–35
http://www.bookreviews.org/bookdetail.asp?TitleId=8866
Reviewed by Robert Foster

Posted by Charles Savelle at 10:24 AM No comments:


Recently I introduced Genesis: A Theological Commentary for Preachers. Today I want to share an interview with the book’s author, Dr. Abraham Kuruvilla. Abe is Associate Professor of Pastoral Ministries, at Dallas Theological Seminary and has a particular passion for the art and science of preaching. He has served as the President of the Evangelical Homiletics Society and as interim preacher of a number of different churches. Abe blogs regularly at www.homiletix.com. He has also written a commentary on Mark which you can access here and for a more formal statement of Abe’s hermeneutic check out his book Privilege the Text! here.

Question: How did Genesis: A Theological Commentary for Preachers come about?

Well, I’m on a crusade! I have been engaged in laying out a somewhat new hermeneutic for approaching the biblical text, from a preacher’s point of view. Or maybe I should say, from an application point of view. Language philosophy has now bloomed in the last decade or so and we have come to see better how language and communication—of any sort—should be understood. Biblical authors, like any other authors, do things with what they say. They have an agenda. And it is only by catching the agenda of the author that valid application can be made. The field that looks at what authors do is called pragmatics. And my crusade is to apply pragmatics to biblical texts in order to arrive at valid application. 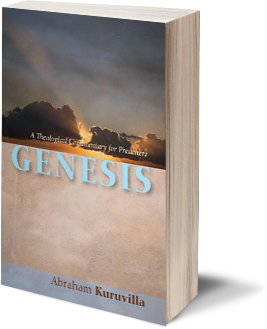 
Now if that statement by A to B (“Hey, you are standing on my foot!”) were an inspired utterance, the preacher expositing that “text” on Sunday morning would conceivably expatiate on the derivation of the word “foot” from the Old English fot from the Latin pes from the Greek pos. He might discourse upon the foot’s kinesiology (26 bones, 33 joints, over 100 muscles, tendons, and ligaments), its hematology (blood vessels and vasculature), and its neurology (nerve supply). The preacher would, no doubt, wax eloquent about the pathology of that extremity (the various abnormalities: club foot, flat foot, athlete’s foot, skew foot, rheumatoid foot, …); and so on, focusing on all the “ologies,” but completely missing the intended valid application of that original utterance: “Take your foot off mine."

In other words, unless one catches what A is doing with what he is saying (the pragmatics of the utterance), valid application of A’s utterance is impossible. Of course, all this is critical for the preacher, the one whose goal as intermediary between God’s word and God’s people is, by the power of the Spirit, to provide application possibilities for listeners from Scripture.
So, my crusade, in short, is go through every pericope of every book of the Bible, demonstrating, with a close look at the text, what the author is doing with what he is saying in that pericope.

Sixty-two more books left. Another 124 years and I’ll be done!


Question: Although the subtitle for your book (A Theological Commentary for Preachers) suggests that preachers are your intended audience, who else might benefit from reading this book and why?

Preachers, as I mentioned, have the primary task of bringing application to their listeners, and so this (and the others in the series) are written with the preacher in mind. But in actuality, such a hermeneutic, and such a reading of the biblical text, is critical not only preachers, but for anyone who seeks to apply Scripture to life.

And, since it all hinges on a close reading of the text in the original languages, some knowledge of Hebrew (and Greek for the NT commentaries) is helpful for using my commentaries, even though I have transliterated and translated every foreign language term that I use.

Question: What do you hope to accomplish through this book?

Traction for the crusade and getting more students of the Bible (and that includes preachers as well as lay people) to appreciate what the biblical authors are doing. This I think is key if believers are to apply Scripture. If I can get people thinking about looking at the text this way, I’ll label my crusade a success.

Frequently, especially for narrative, we view the text as a plain glass window through which we look to see what really happened. I am claiming that “what really happened” is not inspired and profitable for doctrine, reproof, correction …. Rather what is inspired is the Holy Spirit’s account of what happened. In other words, this theological hermeneutic that I propound calls for readers not to see the text as a plain glass window through which they look, but as a stained glass window at which they look. The colors, shapes, lead, mercury, etc., are doing something—they are telling a story. So also the text: its literary properties must be appreciated, its structure must be respected—the text itself must be privileged.

Question: As you know there is considerable discussion today related to creation and Genesis 1–2. Could you offer a few suggestions on how preachers might best navigate these texts?

My recommendation would be to look at the text (any text of the Bible) not as a manual of information but as a guide for transformation—of our lives and the lives of all believers. That being said, because of the controversies related to Gen 1-3, I have several excursuses related to the key issues therein, that I think might be useful to readers. And I have listed some outside resources in those sections.

Question: Other than your book, what are some other resources that might help those who are interested in preaching or teaching Genesis?

The ones I interacted the most with are commentaries on Genesis by Cassuto, Cotter, Fokkelman, Hamilton, Kass, Mathews, Waltke, Walton, and Wenham. Great stuff! I stand on their shoulders with humility and gratitude.

Posted by Charles Savelle at 10:16 AM No comments:

The Psalms: Language for All Seasons of the Soul: A Review


Schmutzer, Andrew J., and David M. Howard Jr., eds. The Psalms: Language for All Seasons of the Soul. Chicago: Moody, 2013.

This work is an interesting collection of essays and sermons on the Psalms divided into five categories: Part 1: Psalms Studies in the 21st Century: Where We Have Been and Where We are Going; Part 2: Psalms of Praise: Expressing Our Joys; Part 3: Psalms of Lament: Expressing Our Sorrows and Pain; Part 4: Considering the Canon: Psalter as a Book; and Part 5: Communicating the Psalms: Bringing the Psalms into the Present Day. Most of the essays were originally presented in the Psalms and Hebrew Poetry consultation/section of the Evangelical Theological Society and include 18 contributors, including well known evangelicals such as Bruce K. Waltke, Willem A. VanGemeren, Walter C. Kaiser, Jr., and John Piper.

These diverse essays are well chosen and helpful. Three will be noted here. I remember sitting in on Waltke’s presentation at ETS and I looked forward to revisiting presentation in print form. I suspect that not everyone will appreciate the anecdotal approach to “Biblical Theology of the Psalms Today: A Personal Perspective,” but I enjoyed it. It is a great reminder of how Scripture takes us on a lifetime journey of understanding and appreciation. Although not as personally satisfying, Willem VanGemeren’s “Entering the Textual World of the Psalms: Literary Analysis” is a very nice summary of recent academic studies in the Psalms. This is a good essay to assign as reading for introductory courses on the Old Testament or the Psalms. An essay that I found spiritually edifying was “The Transformation of Pain into Praise in the Individual Lament Psalms by Daniel Estes. This work highlights the importance of meditating on the Lord as demonstrated through the psalmists.

The Psalms: Language for All Seasons of the Soul is better suited for academic than lay study. A number of the essays require at least a basic knowledge of Hebrew and it is unlikely that those who lack at least some seminary-level training will be able to profit from a few of the essays. That being said, those with academic experience can profit much from the work here.

Much thanks to the folks at Moody for providing the volume used in this unbiased review.
Posted by Charles Savelle at 3:16 PM 2 comments:

The latest edition of Themelios is out and available as a pdf  here. The main articles include:

D. A. Carson | EDITORIAL: Do the Work of an Evangelist

Michael J. Ovey | OFF THE RECORD: The Covert Thrill of Violence? Reading the Bible in Disbelief

Collin Hansen | Revival Defined and Defended: How the New Lights Tried and Failed to Use America's First Religious Periodical to Quiet Critics and Quell Radicals

Ray Van Neste | PASTORAL PENSÉES: The Care of Souls: The Heart of the Reformation

Posted by Charles Savelle at 9:26 AM No comments:

David Murray has presented his top ten books on preaching here. Make sure to check out his honorable mentions as well and vote on your favorite as well. I am a bit surprised that Haddon Robinson's Biblical Preaching (now in a 3rd ed.) did not make the top ten or honorable mention lists but I guess this is one thing that makes these kinds of posts interesting.
Posted by Charles Savelle at 8:45 AM No comments:

This might be a tad bit late, but Brian Renshaw has created a nifty PDF for reading the resurrection accounts in all four Gospels. You can check it out here.
Posted by Charles Savelle at 5:36 PM No comments: