The Centrality of the Jerusalem Church


"That the Jerusalem church held a uniquely important and authoritative place in earliest Christianity is also plainly evidenced in Acts. The earliest circle of believers is ordered by the resurrected Jesus to remain in Jerusalem (1:4), where the first Christian proclamation occurs (chaps. 2-7). As in Gal 2:1-10, it is to Jerusalem that a delegation from the church of Antioch goes for a definitive ruling on the question of Gentile admission. Similarly, it is to James and the elders of the Jerusalem church that Paul presents himself in Acts 21. This list could be extended considerably, but the point should be obvious: in Acts, Christianity begins and remains centered in Jerusalem."

Luke-Acts and the Centrality of Jerusalem

Although some would argue against the centrality of Jerusalem in Luke-Acts, most tend to affirm the pivotal role of Jerusalem. For example, Andrew Rider states,
"The unity of Luke's double volume is achieved in two ways. There is, first of all, an external unity. More than any of the other evangelists, Luke is concerned with geography. For example, he extends Mark's story of Jesus on 'the way' in the central section of his Gospel. The journey to Jerusalem occupies a central portion of the narrative.
. . .
"Jerusalem, then, forms the geographical link between the Gospel and Acts. The account of the ascension from Jerusalem is repeated at the beginning of Acts. The disciples are told to await the coming of the Holy Spirit in Jerusalem. The city is the focal point from which the universal mission of the church radiates-even Paul has to return there. Jerusalem remains the mother-church as the Word of the Lord spreads to the ends of the earth. The city provides the external geographical link that binds Luke's story together."
Andrew Ryder, Following Christ: Modes of Discipleship in the New Testament (Franklin, WI: Sheed & Ward, 1999), 74–5.
Posted by Charles Savelle at 5:36 AM No comments:

One's View of God and Worship

"'The words 'I am thy God' are the standard and measure of everything that can be said about worship.'" These words of Luther show that God and worship belong together. A person's picture of God determines his idea of worship. Indeed, the First Commandment is basic for Luther's idea of worship. Faith itself is the essence of worship; for faith is the fulfillment of the First Commandment, and idolatry is nothing but unbelief. Man must decide between worship and idolatry. There is no other choice. Either God is "our God," and we live in fellowship with him, or else by distrust despise him. The one implies worship, the other idolatry."
Vilmos Vajita, Luther on Worship: An Interpretation (Philadelphia: Muhlenberg, 1958), 3.
Posted by Charles Savelle at 5:32 AM No comments:

Hemer on Revelation as Apocalyptic

I recently found a used copy of Colin Hemer’s The Letters to the Seven Churches of Asia in Their Local Setting. As I was flipping through the book, I came upon the following paragraph under the heading “The Revelation as Apocalyptic.”

”The topic of apocalyptic needs to be considered first. I believe that the connection of the Revelation with earlier works of this genre has been overestimated. If apocalyptic, it is apocalyptic with difference. Previous samples were pseudonymous, and generally imitative and pedestrian. But if John used the machinery of a traditional form, he invested that form with a new dimension, and his work cannot be judged within the limits of a convention. The content is here important, even though the rigid and elaborate structure invites concentration upon the form. The imagery is used in a pointed and allusive way: the whole differs from much other apocalyptic in the kind of way that allegory is regarded as differing from parable. In extra-Biblical apocalyptic only perhaps the earlier Sibylline Oracles display any comparable concern with the details of geography and history, and the Fourth Book, which alone permits confident judgment on its unity and provenance, was written in Asia shortly before the Revelation (cf. J. B. Lightfoot, Colossians and Philemon, p. 96).”
I agree with Hemer. I have long questioned how some have examined extra-biblical apocalyptic works, identified a set of characteristics that appear to be common to those works, and then use those characteristics as a grid to interpreting the Book of Revelation without giving adequate consideration to the differences in the Book of Revelation itself. In my opinion, such an approach tends to flatten both the material in the extra-biblical works and Revelation.
Colin J. Hemer, The Letters to the Seven Churches of Asia in Their Local Setting, Biblical Resource Series, ed. Astrid B. Beck and David Noel Freedman (Grand Rapids: Eerdmans, 2001), 12.

"Great preaching will not ignore the fact that men and women need to hear the Word of God against the backdrop of the major ills, dilemmas, and questions of our own day. Therefore, it is as crucial for the preacher to be a student of the times as to be a student of Scripture. Only when a good match has been made between current questions and their biblical answers will preaching be effective, relevant, and challenging."

Free Audio Download of Bridges' The Pursuit of Holiness

Posted by Charles Savelle at 10:31 PM No comments: 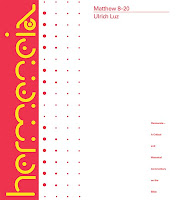 This is the second of a three-volume commentary on the gospel of Matthew from Europe's leading Matthew scholar. Volume 1 Matthew 1–7 was previously published in the “Continental Commentaries” series. Luz’s commentary is especially noteworthy, not only for his incisive exegesis, but also his keen eye for the importance of the history of interpretation and his attention to the relevance of the New Testament for contemporary Christian ethics. This commentary includes excursuses on Son of David; Matthew’s Interpretation of the Parables; Peter in the Gospel of Matthew; and Son of Man.
Abbreviated Table of Contents:
Foreword
Preface
Reference Codes
Editor's Note

I have been thinking about what we mean when we say "Jewish Christian" in New Testament terms. Craig Hill makes offers the following suggestion.
"It would be possible to call the members of the Jerusalem church 'Jewish Christians' and mean by it only that these were Christian believers whose ethnic identity (to use modern category) was Jewish. That would be little different from saying that someone is an Irish athlete or an African American singer. These designations tell us something specific about the person but nothing particular about the form of athletics or the type of singing. Few people speak of Jewish Christianity in this sense. Instead, the qualifier 'Jewish' is substantive: a Jewish Christian is one whose self-understanding, beliefs, and practices are substantially both Jewish and Christian."
Craig C. Hill, "the Jerusalem Church," in Jewish Christianity Reconsidered: Rethinking Ancient Groups and Texts, ed. Matt Jackson-McCabe (Minneapolis: Fortress, 2007), 45.
Posted by Charles Savelle at 4:56 AM No comments: