Posted by Charles Savelle at 3:02 PM No comments:

Posted by Charles Savelle at 4:37 PM No comments:


The Criswell College in Dallas, TX is holding a conference on the Future Kingdom: Perspectives on the Millennial Reign of Christ. It is part of the annual Criswell Theological Lectures. The event will be held on October 12, 2012, from 10 AM - 4 PM on the Criswell campus. Speakers include Craig Blaising, Craig Blomberg, Greg Beale, Kenneth Gentry, H. Wayne House, and Don Preston. The cost of the conference is: $30.00 for the general public, $20.00 for Criswell alumni, and $20.00 for students. Attendees must register by October 9 to reserve lunch. Registration at the door is possible, but lunch is not guaranteed. To register, RSVP to Evie Cozart at ecozart@criswell.edu or by clicking the online link here. 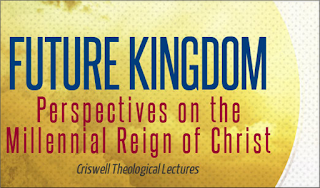 Posted by Charles Savelle at 2:31 PM No comments:

The Value of Preaching the Old Testament Historical Books


"So within the larger narrative of the Bible, the historical books have an essential role to play. How can a congregation marvel at the coming of the righteous Son of David if they are not familiar with the failures of the Davidic kings who ruled before him? How can they understand the depth of God’s compassion and mercy if they have not grappled with Israel’s rebellious and stubborn heart? How can your congregation fully grasp the extent of Israel’s idolatry, and indeed, the plight of humanity, without the books of Judges and Kings? While the law is given during the time of Moses, it is the historical books—books such as Judges, Samuel, Kings, and Chronicles—that show whether or not the Israelites actually obeyed God’s laws. It is the historical books that reveal the character of God, and our sinful nature, which is exposed so powerfully in the story of Israel.”

Posted by Charles Savelle at 5:34 PM No comments:

The First Chapter of Daniel

The first chapter of Daniel can be read as a simple, but encouraging, story about living in the midst of a world that does not share one’s values. It is that. But it is also a story that sets the tone and previews the book. This can be seen in at least five ways.

(2) Chapter one sets the stage historically in the narrator’s note that the Lord delivered Jehoiakim king of Judah into Nebuchadnezzar’s hand (v. 2).

(3) Chapter one sets the stage theologically. In noting that the Lord delivered Jehoiakim king of Judah into Nebuchadnezzar’s hand, we see an important theological element of the book, namely, that all the empires of the world are under the sovereign control of God. This sovereignty is not only at the national level, but it is at the personal level as well. This is evidenced in God influencing the royal official to show favor and sympathy to Daniel (1:9).

(4) Chapter one sets the stage literarily. This can be seen in several ways. In this chapter we are introduced to most of the main characters in the book. We also note the piety of Daniel and his friends, a quality that will be on display throughout the book. It is frequently noted that Daniel is one of the few characters in Scripture for which nothing negative is recorded. The reference to “the articles from the temple of God” (v. 2) foreshadows the events of Daniel 5. The narrator’s comment that God gave Daniel understanding of “visions and dreams of all kinds” (v. 17) is preparatory for Daniel’s interpretations and reception of dreams and visions through the book.

Posted by Charles Savelle at 12:35 PM No comments:


A recent Wall Street Journal article entitled “Geography Strikes Back” reminded me of the importance that geography plays not only in understanding geopolitical realities, but also in understanding and appreciating the Bible. I know that biblical geography is not considered as hip as knowing Greek and Hebrew, but the longer I study, the more I appreciate the value of understanding the literal “facts on the ground” as it were. It is, of course, not an either/or dichotomy. You can and should study the biblical languages when possible. But how many spots on our shelves are filled with grammars and lexicons and yet we're lucky if we have one top-flight Bible atlas among our resources? When was the last time that you actually read your atlas or used a map to better understand the text? Maps and site pictures are not just eye-candy for our presentations but valuable tools in the work of understanding the Scriptures.

This may be old news, but it is new to me. Walter Kaiser, the well-know Old Testament scholar, has a website here.

Posted by Charles Savelle at 2:48 PM No comments: