Some Possible Sales of Interest for Bibliophiles

Here are some sales that might be of interest.

Amazon has a 30% off sale of one item until 11/30. Use the code "HOLIDAY30." But do note that it caps out at $10 so you won't get a great break on more expensive volumes. If you don't have Prime then free shipping starts at $35. You can check it out here.

Oxford University Press has 50% off of volumes here until 1/15/2016. On the downside, free shipping starts at $150. Standard shipping charges for US orders is $5.50 for the first book and $1.50 for each additional book You can check it out here.
Posted by Charles Savelle at 7:14 AM No comments:

at the recent Dallas Theological Seminary alumni breakfast at the Evangelical Theological Society. The volume entitled, The Theory and Practice of Biblical Hermeneutics: Essays in Honor of Elliott E. Johnson. The volume consists of an introduction by E. D. Hirsch and seventeen essays from Walter Kaiser, Norm Geisler, and others. This work is also one of the new offerings of a publishing venture led by H. Wayne House called Lampion Press. 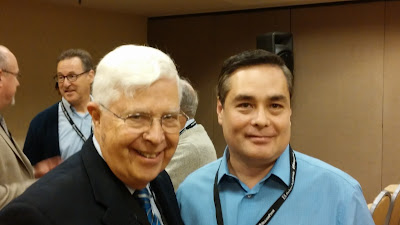 Here is a picture of Dr. Johnson and me at the breakfast.
Posted by Charles Savelle at 3:35 PM 2 comments:

Journal for the Study of the New Testament 38:2

Here are the articles to the latest issue of the Journal for the Study of the New Testament. The links will take you to an abstract.

Where is Philemon? The Case for a Logical Fallacy in the Correlation of the Data in Philemon and Colossians 1.1-2; 4.7-18
Vicky Balabanski

The Moral Character Development of the Boy Jesus in the Infancy Gospel of Thomas
Michael R. Whitenton

Posted by Charles Savelle at 9:46 AM No comments:

Labels: Journal for the Study of the New Testament, Journals

The Ascension and Atonement in Hebrews

Mike Skinner has an interesting post suggesting that, "the locus of atonement as happening in heaven at the time of the ascension." You can check it out here.

Posted by Charles Savelle at 8:42 AM No comments:

Book Review: A Commentary on the Manuscripts and Text of the New Testament

Philip Wesley Comfort, A Commentary on the Manuscripts and Text of the New Testament (Grand Rapids: Kregel, 2015).


Those who preach, teach, or study the Bible seriously will at some point encounter issues related to variant readings in the text and whether they do so knowledgeably or not, will practice a form of text criticism. So having reliable and helpful resources is invaluable. Philip Wesley Comfort’s  A Commentary on the Manuscripts and Text of the New Testament attempts to be such a resource.

The commentary proper is broken down into seven chapters covering the Synoptic Gospels, the Gospel of John, Acts, Paul’s epistles, Hebrews, the general epistles, and Revelation. It is important to know that Comfort’s general approach is to give greater weight to external rather than internal evidence, and to give great preference to the early manuscripts, so in most cases to the papyri (p. 31). So Comfort states, “In this volume, manuscript evidence is given priority of place inasmuch as the readings of the earliest manuscripts are always followed” (p. 31). This is important because Comfort states that he practices “reasoned eclecticism” (p. 31) but his approach differs from others who also claim to practice “reasoned eclecticism”

By way of evaluation, there are several admirable features of the book. First, it contains a good introduction to manuscripts, texts, and nomina sacra (chapter one). I especially enjoyed the discussion on nomina sacra. Second, I also believe that the annotated discussion of manuscripts is helpful (chapter 2). Third, on a more practical level, the volume is deliberately sized to match the UBS and NA28 Greek New Testaments. Finally, the volume is fairly reasonably priced at $29.99.

Now for what I don't like. First, the repetitive parenthetical definition of nomen sacrum as sacred name. The parenthetical definition does not appear every time but many, many times and it got to be annoying. Second, this work curiously refers to the somewhat outdated BAGD instead of BDAG and NA 27 and UBS 3 and 4 instead of NA 28 and UBS 5 respectively. Similarly, some of the volumes referenced in the bibliography are not current. For example, the first rather than the second edition of Kurt and Barbara Aland's The Text of the New Testament is listed.

Those who have cut their teeth like me on Metzger’s A Textual Commentary on the Greek New Testament may wonder whether Comfort’s volume replaces, supplements, or is redundant to Metzger. I think it is is best utilized as a supplementary text. Its approach is different from Metzger and also tends to highlight the nomina sacra more but I think as a whole that I prefer Metzger's discussions. Nonetheless, Comfort's volume can serve as a handy counterpoint to Metzger.

Thanks to Kregel for providing the free copy used in this unbiased review.
Posted by Charles Savelle at 8:45 AM No comments:

Rare Christian Papyrus on eBay for $99?

Apparently a papyrus fragment containing a small portion of the Gospel of John was being listed on eBay for an opening bid of $99. You can read about it here.
Posted by Charles Savelle at 4:08 PM No comments:

Recently while going through some old articles in my files, I reread this piece by Jerome Murphy-O'Conner. I thoroughly enjoyed going through it but especially tthe following excerpt about bedbugs.


"Those who could afford better rented beds in the rooms. The snorting and stamping of the animals outside was sometimes drowned out by the snores of others who shared the room, anyone of whom might be a thief. Paul’s anxiety that he might lose the tools of his trade was hardly conducive to a sound night’s sleep. And sound sleep was made infinitely more difficult by that perennial occupant of all inns, the bedbug.
"The menace posed by the bedbug is graphically— and amusingly—described in a tale from the Acts of John written in the third century A.D. about a journey from Laodicea to Ephesus.
“On the first evening we arrived at a lonely inn, and while we were trying to find a bed for John we noticed a curious thing. There was one unoccupied and unmade bed, so we spread the cloaks which we were wearing over it, and begged him to lie down on it, while all the rest of us slept on the floor.
“But when John lay down he was troubled by the bugs. They became more and more troublesome to him, and it was already midnight when he said to them in the hearing of us all, ‘I order you, you bugs, to behave yourselves, one and all. You must leave your home for tonight and be quiet in one place, and keep your distance from the servants of God.’ And while we laughed and went on talking, John went to sleep, but we talked quietly and, thanks to him, were not disturbed.
“Now, as day was breaking, I got up first, and Verus and Andronicus with me, and we saw by the door of the room which we had taken an enormous mass of bugs. We were astounded at their great number. All the brethren woke up because of them, but John went on sleeping. When he woke up, we explained to him what we had seen. He sat up in bed, looked at the bugs, and said, ‘Since you have behaved yourselves and listened to my correction, you may go back to your own place.’ When he had said this, and had got up from the bed, the bugs came running from the door towards the bed, climbed up its legs, and disappeared into the joints” (#60–61).'"

“On the Road and on the Sea with St. Paul: Travelling Conditions in the First Century,” Bible Review 1:2 (Summer 1985).

If you enjoyed this excerpt, you might want to check out, “On the Road with Paul” by Edwin Yamauchi at the Christian History Institute website. Use this link.
Posted by Charles Savelle at 9:14 AM No comments: