I am a bit old-school so this post about dressing properly for seminary resonated with me.
Posted by Charles Savelle at 9:53 AM No comments:

The Uniqueness of God's Covenant with Israel

I have expressed my reluctance before to using the so-called suzerain-vassal treaty forms as an interpretive grid for the Mosaic Covenant or certain parts of the Pentateuch. I believe that it is more likely that the these biblical texts and suzerain-vassal treaties owe their similarity to the fact that they draw from the same pool of elements that most agreements draw from (e.g., identification of the parties, stipulations, witnesses, etc.).

I believe that my argument is bolstered somewhat by John Walton's assertion that, "In the ancient Near East, the idea of a god who made a covenant with a group of people was unique to Israel—a circumstance for which we have little precedent" (Old Testament Theology for Christians: From Ancient Context to Enduring Belief [Downers Grove: InterVarsity, 2017], 105). So it is possible that one could play the ancient Near Eastern background card to show that God was doing something different and not relying on cultural norms such as suzerain-vassal treaty forms.
Posted by Charles Savelle at 10:18 AM 1 comment:

Several years ago, I became aware of a helpful visual resource that covered the entire Bible by James Yoder. 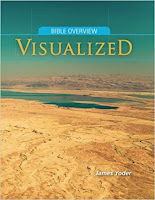 James has now improved and revised his work in a new volume entitled, Bible Overview Visualized. Here is the book's description.

Bible Overview Visualized is an easy-to-comprehend resource tool that can help anyone see and understand the Bible in its entirety. It relies heavily on graphics to assist the reader to see not only every chapter of the Bible, but also how each book fits within the context of the Bible where it is located. Additionally, the story of the Bible is presented to help the reader understand the what, the why and the how of Scripture.

This volume is even better than the original and I would encourage you to give it a look. You can check it out or order it from Amazon here.
Posted by Charles Savelle at 9:34 AM No comments:

Chris Skinner's Reading John is the free book of the month from Wipf & Stock. But note that the deal expires on December 10. You can access the offer here and follow these instructions.

1. Click on the link above
2. Click "ADD TO CART" on the eBook option
3. Code "ebookfree" is automatically applied within the shopping cart
4. Upon checkout completion, you will receive a confirmation email with instructions on how to download your free eBook
5. Free eBook offer applies only to Reading John
Posted by Charles Savelle at 1:46 PM No comments:

BiblePlaces recently released their latest volume featuring Persia. This collection of brand new images includes 22 PowerPoints and more photographs than any other Pictorial Library of Bible Lands volume. I didn't count all the images 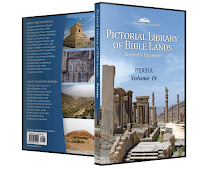 but the PDF index listing all the images runs 46 pages! Todd Bolen combines a photographer's eye with a Bible scholar's knowledge. So if you teach or preach from books like Daniel, Esther, Ezra, and Nehemiah, you really owe it to yourself to check out this volume. Plus, you can now order the Persia volume at the introductory price of $25 (download or DVD or both).
Posted by Charles Savelle at 9:24 AM No comments:

The Latest Issue of the Review of Biblical Literature

The latest issue of Review of Biblical Literature is out. Reviews can be accessed by clicking the links below but unfortunately you must be a SBL member.

Jordan J. Ryan, The Role of the Synagogue in the Aims of Jesus
Reviewed by Byron R. McCane

Patrick Schreiner, The Body of Jesus: A Spatial Analysis of the Kingdom in Matthew
Reviewed by Wongi Park

David I. Starling, Hermeneutics as Apprenticeship: How the Bible Shapes Our Interpretive Habits and Practices
Reviewed by Matthew Lloyd Halsted

W. Dennis Tucker Jr. and W. H. Bellinger Jr., eds., The Psalter as Witness: Theology, Poetry, and Genre; Proceedings from the Baylor University–University of Bonn Symposium on the Psalter
Reviewed by Steven Bishop

Posted by Charles Savelle at 9:12 AM No comments:

Free Audio Book of the Month: The Confessions of St. Augustine

Christianaudio.com's free audio book of the month is The Confessions of St. Augustine. To read more about this resource and to get your free audio download in either MP3 or M4B formats go here.
Posted by Charles Savelle at 7:11 AM No comments: