Recently, while reading through Richard Abdy and Amelia Dowler’s Coins and the Bible I came upon an interesting reference to a 2nd–3rd century AD coin from Apamea in Phrygia that references the Noah story.[1] “These rare coins were issued under Septimius Severus, Macrinus, Gordian III, Philip and Trebonianus Gallus.”[2] According to Abdy and Dowler,


The coin reverse shows Noah and his wife twice. On the left they have arrived on Mt. Ararat but even more interestingly on the right they are in transit, adrift in the ark; shown somewhat surprisingly to the modern viewer as a simple box or rather a chest or lid (and conveniently labeled with Noah's name in Greek: NΩЄ. Above the dove with the olive branch sets the scene from Genesis 8:10–11.[3]

This reference is interesting for at least four reasons. First, this does not appear to be a Jewish or Christian coin but one that comes from pagan Apamea. Second, the dating to 2nd–3rd century AD places it before the Edict of Milan (AD 313) and the move to a Christian Roman empire. Therefore, an explicit biblical reference would be unusual. Third, it is one of the earliest, if not the earliest, explicit reference to an Old Testament personage or event on a coin. Fourth, as noted by Abdy and Dowler, the depiction of the ark as a box is interesting lexically. As Markowitz notes, “the Hebrew word for ark, tebah, was translated as kibotos, which means ‘chest’ or ‘shipping crate.’”[4] Markowitz is correct regarding the general meaning but kibotos also carries the specialized sense of “sea-faring vessel, boat, ark” or according to Moffatt, like a “barge.”[5] In any case, either the coin is a highly stylized depiction of the ark, a misunderstanding of the narrative, or both. 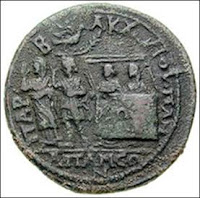 
[5] κιβωτός, BDAG. It is interesting that although the Hebrew tebah is used of the “basket” that baby Moses is placed in (Exod 2:3, 5), in the LXX kibotos is not used but rather the term thibis.


[7] https://www.acsearch.info/search.html?id=910868. Special thanks to Russell Atherton for providing this information as well as Markowitz’s article.
Posted by Charles Savelle at 9:53 AM